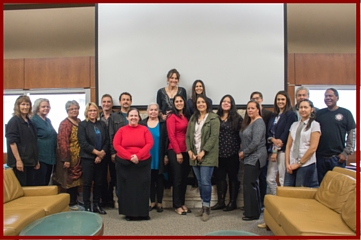 The National Endowment for the Humanities awarded California State University San Marcos (CSUSM) a Humanities Initiatives Grant to build a 21st century American Indian Studies (AIS) Program. The eighteen-month project is designed to enhance the minor and to support the development of a major in American Indian Studies. Professional development workshops were held in Spring 2016 with a goal to develop new courses for delivery at CSUSM as early as Fall 2016.

This is an opportunity for twenty select faculty participants from regional colleges and universities in a humanities discipline to enhance their teaching and research through an 18-month project. Participants will engage prominent scholars in the field of American Indian Studies alongside regional tribal subject matter experts as they explore recent, relevant research on sovereignty, culture, identity, language, literature, and history. The schedule features opportunities for rich, interdisciplinary discussions augmented by distinguished visiting faculty scholars. In the broadest context, this project will serve as a model for the development of an American Indian Studies Department at mainstream institutions through its inclusion of tribal voice.

NEH provides support for projects across America that preserve our heritage, promote scholarly discoveries, and make the best of America’s humanities ideas available to all Americans,” said NEH Chairman William D. Adams. “We are proud to announce this latest group of grantees who, through their projects and research, will bring valuable lessons of history and culture to Americans.

Any views, findings, conclusions, or recommendations expressed in this {article, book, exhibition, film, program, database, report, Web resource}, do not necessarily represent those of the National Endowment for the Humanities. www.neh.gov