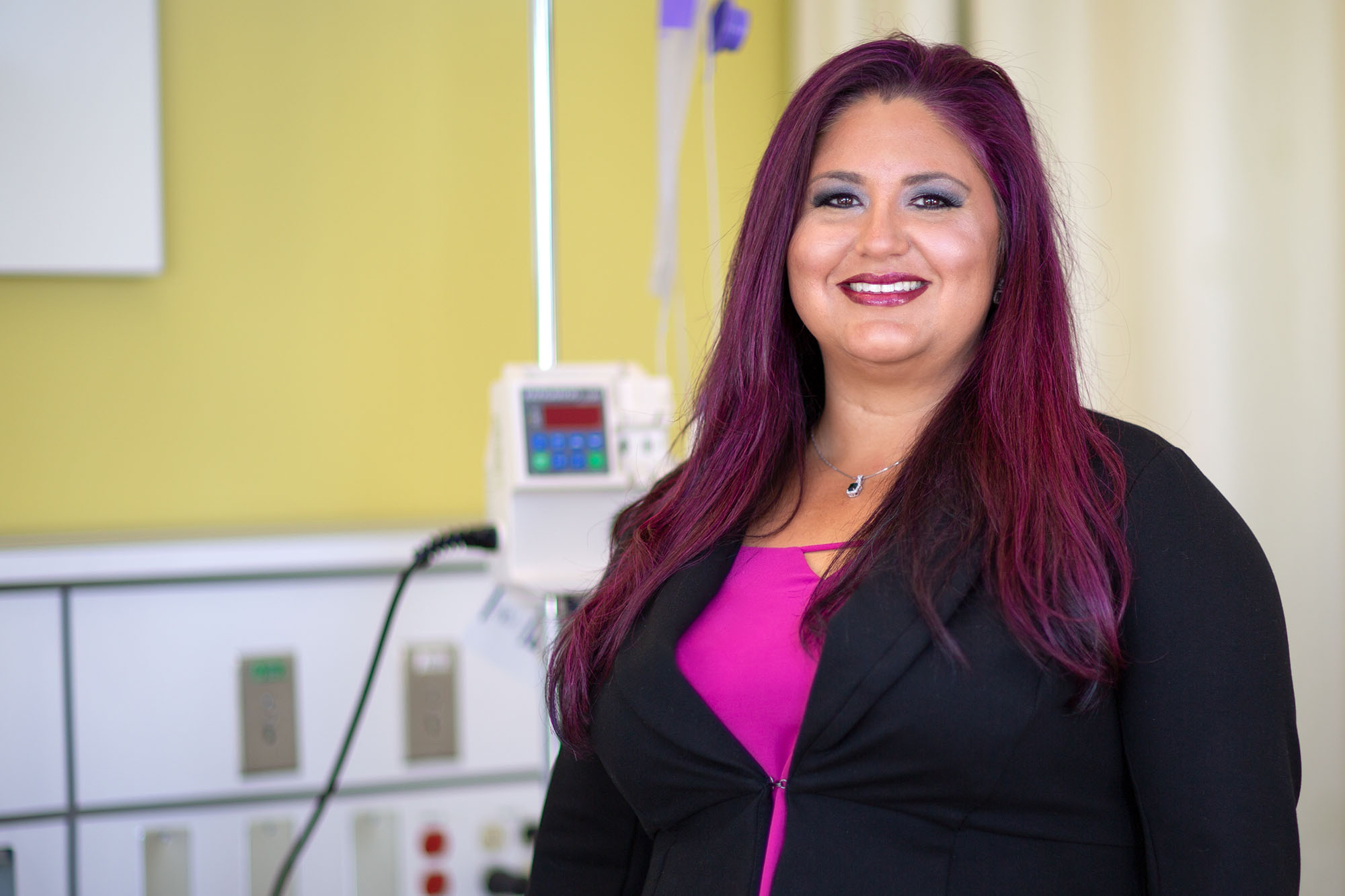 Tabetha Martin has always been a caregiver. It’s not something that she aspires to; it’s simply who she is. By the time she completed her Accelerated Bachelor of Science in Nursing—her second degree at CSUSM—she had already been providing patient care for 16 years.

Born and raised in Riverside, California, Tabetha began working in a small family home for medically fragile infants at age 18, which gave her much more than work experience. It gave her a life’s purpose and her first son.

“Working in that small family home, I knew that that’s what I wanted to do because I saw the difference that start in life made in these kids,” says Tabetha. “It was truly incredible to see the women in the facility bond with the kids in everyday care.” Tabetha’s oldest son, Bryan, came to the small family home at 2 months old and within five months, he was living with Tabetha and her spouse, Timothy, well on the way to being adopted into their family.

“They told us he was never going to walk or talk,” she says. “He was going to be severely delayed. When Bryan came home, he had no response to love, but once that parent-child bond was created, he started developing in leaps and bounds.”

Tabetha started working toward her long-term goal of running a small family home by completing some of the prerequisites for nursing school. In December 2007, however, she and Timothy—who was stationed at Naval Base San Diego—were in the process of moving to Temecula when a car sped around a blind curve on a rainy day and sent their car down an embankment. Tabetha, six months pregnant, hit the roof and then went forward into the windshield, causing head, neck and chest injuries. Because medical protocol at the time did not approve an MRI during pregnancy, she didn’t know that the force of the impact had caused spine injuries, including broken discs and misalignment.

At 41 weeks, daughter Ruth was born full-term, and she was healthy. Tabetha was not, though she persevered, continuing with her education and transferring to Cal State San Marcos. Thanks to an MRI a year after the accident, Tabetha’s doctors finally discovered the spine injuries and she began a series of operations to correct them during her studies toward a BA in psychological sciences at CSUSM.

“Timothy would wheel me around this campus, which is not easy, and he would wait outside so that I would not miss school,” says Tabetha who needed a wheelchair and then a walker following her surgeries.

But in the final semester of her senior year, she had to drop out of school to care for two sisters who had joined her family home: one sister who had adult-onset intracranial hypertension with resulting epilepsy and an adolescent sister with borderline personality disorder—which prompted Tabetha’s interest in the psychological sciences and advocacy on behalf of borderline personality disorder issues.

Hospitalizations and therapies were increasing for both sisters and when she had to choose, of course Tabetha chose caring for family. School would wait.

Ultimately, the teenager’s placement wasn’t considered appropriate in a home with young children, so she was removed. “That was devastating,” says Tabetha, the emotion still evident in her voice.

Tabetha eventually returned to CSUSM to finish her BA, this time with a 4-week-old son, Noah, who she says has grown up at Cal State San Marcos. She then entered the Accelerated Bachelor of Science in Nursing at CSUSM Temecula Campus. A rigorous program for any student, it can be exceptionally challenging for a parent of a special-needs child. And when her sister who had epilepsy passed away from a seizure in the spring of 2019, Tabetha called on her inner strength to continue her studies.

Despite these challenges, she graduated with her ABSN as planned in August 2019, and Timothy and Noah joined her on stage, decked out in matching black with Cougar blue accents.

“It’s been a long road with lots of twists and turns along the way,” Tabetha wrote in an Instagram post about that day. “I could not have done it without the amazing love and support I’ve received. It really does take a tribe and I’m so thankful for mine.”

Tabetha’s children are continuing to thrive. Noah, 3, is an endlessly curious preschooler and Ruth, 11, has just started middle school. As for Bryan, her special-needs son who was never supposed to walk or talk? He’s in high school on the diploma track.

Today, Tabetha is a health services supervisor with Merakey, a nonprofit developmental, behavioral health and education provider, where she oversees the medical and nursing care in the organization’s San Diego County facilities.

With each step, she is closing the gap between the dream and reality of opening a care facility and a wellness center that serves both physical and psychological needs. It may take some time, but she has no doubt that it will happen.

“It’s never been an ‘if,’ it’s just been a ‘when’ and ‘how,’” Tabetha says. “There can be walls put up, but there are always ways to go around them. You have to reach out for the tools you need. And you can’t be afraid to ask for help.”