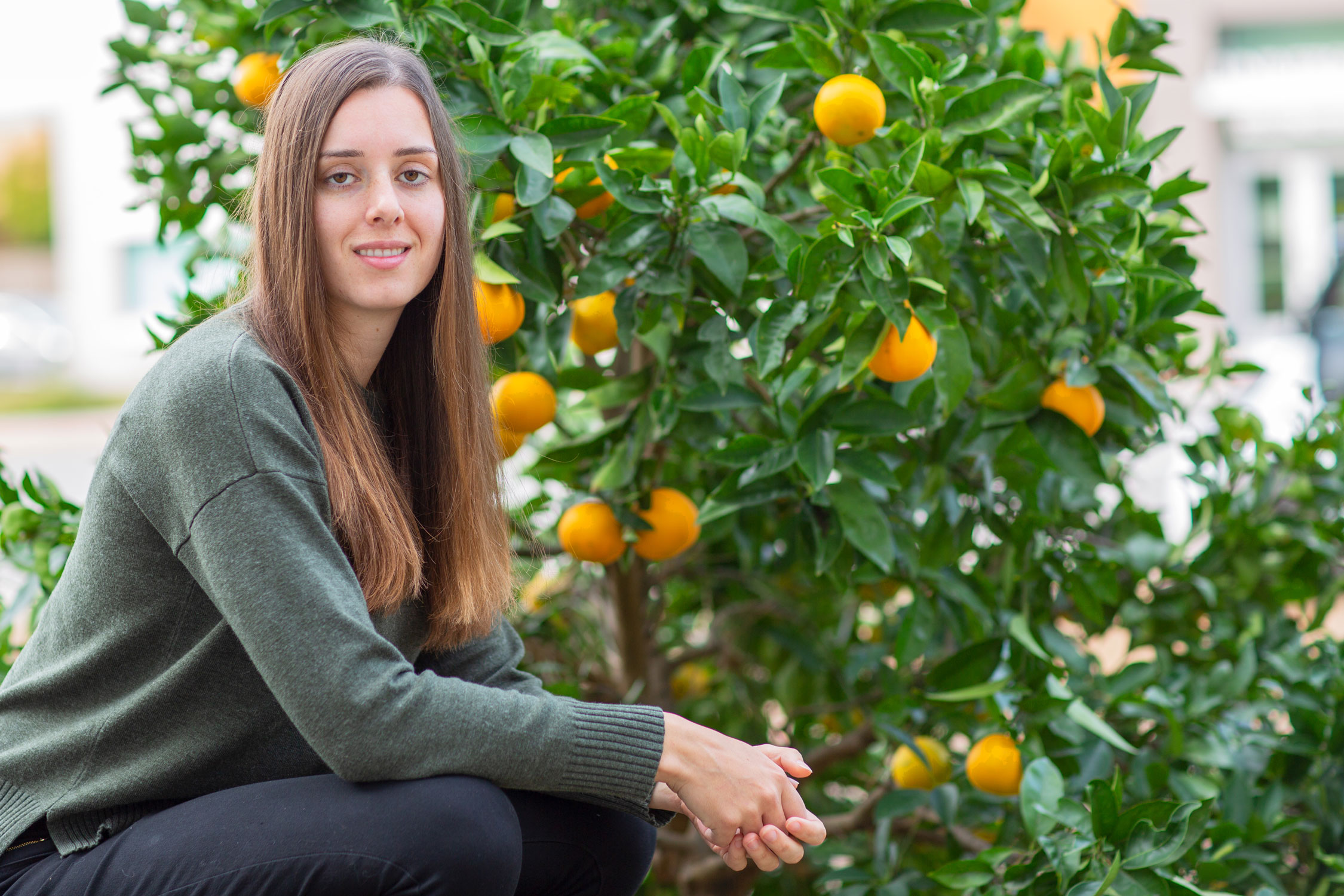 April Dawson came to Cal State San Marcos to study biotechnology. She left with a mission—and a viable method—to help feed the world.

After earning a bachelor’s degree in biology from Idaho State University, April saw the Master of Biotechnology: PSM at CSUSM as a solid next step that would offer a number of career choices when she graduated. As it turns out, she only needed one.

Key to the MBt program is a semester-in-residence in which students work on a research project with a sponsoring organization. April teamed up with Local Urban Vegetables (LUV), an automated vertical farming start-up based in Whittier, California.

With the world’s population expected to increase from 7.7 billion to 9.7 billion by 2050, experts project that food production needs will stress global resources such as arable land and agricultural water used in traditional farming. By contrast, vertical farming is a sustainable, climate-controlled method that produces crops indoors in vertically stacked layers with no soil. Aeroponic technology, or misting the roots of plants, uses 95 to 99 percent less water than conventional agriculture.

Because vertical farming is expensive, however, innovation is needed to either reduce costs or increase revenue, April says. That’s where her research comes in. April’s project at LUV Produce was to test ways to treat spinach seeds— known for slow growth and long germination—to speed up their growth cycle.

“If you can make the plants grow faster, you can reduce your costs for growing the plants and you can get more crops over the course of a year,” April explains.

Using a method called priming the seeds, April applied treatments to the spinach seeds before they were planted. While some researchers use one or two priming methods, April tested and layered four priming methods as she studied varied concentrations and treatment times.

“The final treatment integrated all four priming methods into just two steps and reduced the time to germinate for spinach from 10 days to three days and produced a larger and more even harvest,” she told an audience of scientists during a presentation at the annual meeting of the National Professional Science Master’s Association. “When we stacked the priming methods on top of each other, they weren’t just additive, they were synergistic.”

The staff at LUV Produce was impressed with April’s results and wanted to expand the research, so she received an immediate job offer as a research associate.

“The biggest thing I am working on right now is to find something like vinegar or a weak acid to break down the seed coat so it won’t be difficult for a farmer or farm technician to implement,” April says.

April’s interest in science follows a family tradition, with her dad an electrical engineer in atmospheric research and a brother who works in science at Lockheed Martin. A perpetual family garden introduced April at an early age to plants and the idea of food security. With family conversations often revolving around topics like climate change, plastic pollution, nature, wildlife and stars, April inevitably developed an understanding of and a love for science.

As she moved deeper into her education, April found her connection with the science world through biology, and more recently, through her research in vertical farming.

“Something that’s always driven me toward biology is contributing to human knowledge and also being able to make a difference in the world and in people’s lives,” she says. “This research is an excellent way to make a difference on a very fundamental level and it actually kicked off a career for me. I see myself staying in it for the long run.

“In today’s world, where we have all of this technology, people shouldn’t have to worry about having access to nutritious food. Ideally, my impact will be to help make food available to everybody as a human right.”