"I have seen, learned and practiced many activities and teaching strategies at the ALCI TEFL teacher training program. They take me to a new level!"

"I’m always thinking about the classes at CSUSM because it was such a unique experience and it opened up the globe as far as places I could go and teach English." - Demetrick Allen, Assistant Language Teacher, Okinawa, Japan 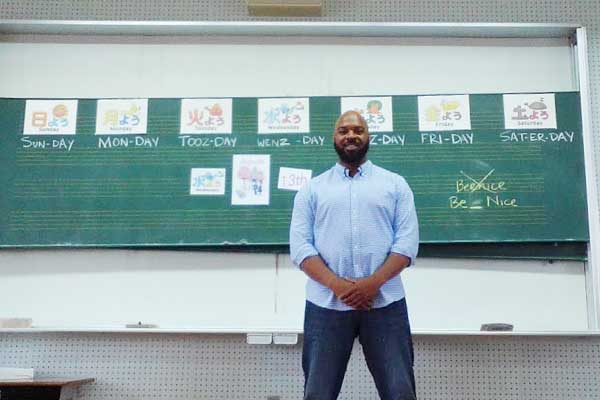 During 26 years in the software business, the last 10 as a corporate trainer, Scott Havenor had an enviable career teaching employees at Fortune 2000 companies around the world. Over the years, he had traveled to 45 countries—24 of those for work, where he stayed in luxury hotels and dined on expense accounts. More important were the friendships he made with his students, who were proud to show him their city.

Then, in December 2015, he was laid off. At 55, he was too young for an early retirement, but what were his options? At the unemployment office, Havenor learned he could get new training, and one of the certificate programs that caught his eye was Teaching English as a Second Language/Foreign Language (TESL/TEFL) at CSUSM.

“I have two master’s degrees and I’ve always loved the education world,” says Havenor, whose tuition was funded through the Workforce Innovation and Opportunity Act. “This seemed natural to me because in my (software) classes all over the world, my students had to speak English, so I know how important it is.”

As part of the 15-week program, the TESL/TEFL students received intensive teacher-training instruction from the faculty and they mastered their skills while working with international students from the CSUSM’s University English Pathway program, which included developing their own lesson plans.

“It was quite involved and I was impressed with the amount of learning,” Havenor says. “I had never formally studied education or training before.”

Havenor completed the certificate program in May 2017 and immediately saw the value of his new certificate. Focusing on finding a teaching opportunity somewhere in Eastern Europe, Havenor connected with a school in Ukraine that teaches American English to employees of local corporations so they can better integrate into the Western globalized economy. The application required a TESL/TEFL certificate and the interview process included preparing a class lesson to be tested on the founder of the company. Havenor polished off one of the practice lessons he created as part of the certificate program.

He received a swift offer and just six weeks after earning his TESL/TEFL certificate, Havenor was heading to Dnipropetrovsk, Ukraine, for a four-month teaching assignment.

In an early report from the field, Havenor has chosen well for country No. 45. He teaches 20 English classes at 10 information technology corporations across the city. From his Soviet-built apartment in the downtown district, he is surrounded by art, music, nature and history, and is within “walking distance to most every place I need to go for work or fun.” He is also considering extending his assignment, confirming that this new direction was the right step for Havenor.

“I was thinking I was really retired,” he says. “This program has validated my professional life since being laid off and has given me a sense of contentment that I was missing. It was the bridge that has enabled this new life I am now going to have.”