CSUSM Student Makes Most of Congressional Internship Opportunity
Jessica Dockstader was understandably nervous heading off to participate in the Panetta Institute's Congressional Internship Program in August.  Jessica, a human development major, knew she would be surrounded by political science students and was concerned about being behind in her knowledge of the political landscape.

Under Dr. Noriko Toyokawa, Human Development, we are a diverse group of research assistants. We are currently examining the issues that emerge between parent-child relationships, when parents are going through tangible dependency on adult children. We have invited adult children who have experienced taking care of their aging parents to focus groups. We facilitated discussions, and developed the coding schema together as a group this summer. As research assistants we have learned the process in which research is conducted and have gained a broad hands-on learning experience in the field of Human Development. We are excited about the findings. Our immediate goal is to submit several proposals to the International Association of Geriatrics and Gerontology in San Francisco for the summer of 2017. (by Erika Martinez, July 5, 2016)

CSUSM graduate advocates now and in the future
Human development major Kyle Azcuna finishes his time at CSUSM leaving behind a legacy of campus involvement and planning a future as an educator. 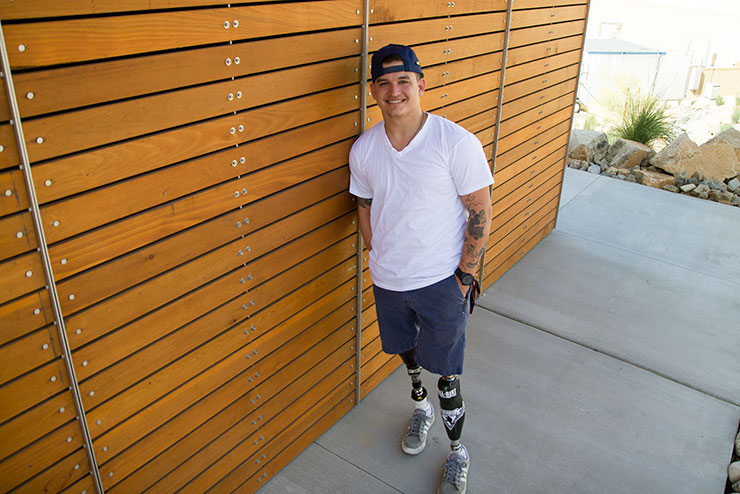 After an improvised explosive device (IED) took both of his legs and part of his right arm, Lance Corporal Erik Galvan has had a long road to healing. Now he is a sophomore at Cal State San Marcos majoring in human development with an emphasis in counseling and plans on a career in social work. While on a visit to Washington D.C. last year, Sayuri Fujita was a little disappointed when she didn’t get to see the magical spring time display of cherry blossoms in the city. However, it was not a wasted trip. Back in her hotel room, as Fujita gazed at the Capitol dome from her window, an idea began to take root. What would it be like to work in the iconic building?

That idea has now come to fruition. Fujita, a Human Development major and Political Science minor at CSUSM, will travel to the nation’s capital in January to spend a semester as a Cal State DC scholar. She will be an intern at the office of Congressman Jared Huffman who represents California’s 2nd District. Fujita will also have the opportunity to earn up to 15 credits while she attends a lecture series, takes a nonfiction writing class and learns about the workings of the city.

“I am really excited,” Fujita said. “I hope to build on my knowledge on how the government works. I want to network, get to know people. I will be gaining some great work experience.”

Fujita, who is the only CSUSM student chosen for the spring Cal State DC program, plans to explore the Smithsonian museums, the Library of Congress, Kennedy Center and other cultural attractions in the city. Her goal is to continue living and working in the nation’s capital after her May graduation from CSUSM. She is also preparing to apply to graduate school to study public health.

The Cal State DC program, administered by Cal State Fullerton, was established a decade ago to support students from all 23 Cal State campuses who choose to do internships in the government agencies, think tanks and non-profits in the nation’s capital. The program assists students in finding housing and internships, and provides the information they need to make the best use of their time in D.C.

“Washington is a great metropolis,” Melena said.  “Students experience life in the East Coast, learn how to get around in a big city, network and explore the cultural richness of D.C.”

The Cal State DC program is open to upper division and graduate students across all majors. For more information about applications and requirements, contact Melena at lmelena@csusm.edu.

Nurturing the Scientists of the Future

Since 2006, the fall Nu Upsilon Research Conference at CSUSM has given Kinesiology and Human Development students the opportunity to present the findings of their undergraduate research before an audience of peers and faculty.

The 2014 conference, held in early December at the Student Union, featured the work of more than three dozen students in classes taught by faculty members Elizabeth Bigham, Kathy Fuller and Yujiro Shimagori.  The presentations spanned a wide array of research interests, from attitudes toward disabilities to stress triggers for college students, from the impact of caffeine on well being to the relationship between fast food and sleep.

Bigham, a Human Development lecturer, launched the conference in 2006 to give undergraduate students in her Applied Research class a chance to present the results of their projects before an audience.

“The conference gives students the opportunity to discuss their work with peers and faculty, and gain recognition for their work,” Bigham said. “It increases their confidence in understanding the research process and they obtain additional mentoring from faculty. Many students have commented that the experience of presenting at the conference encouraged them to consider advancing to graduate school.”

Featured speaker Tiffany Tooley, an honor student who is working toward degrees in Human Development and Medical Anthropology, shared her inspirational story of hard work and persistence.

“A test that I took told me I was not smart enough to take college courses. My heart told me otherwise,” Tooley told her cheering audience. “Whenever I got down I would always remember what my mother told me. She would say, "As long as you try your hardest, you shall never fail.”

The conference was also an opportunity to recognize fall graduates. Among them was Lorena Davies, a Human Development major.

“The event was a really fun way to present the research that we have been working on all semester,” Davies said. “It was a great way to celebrate all the hard work we have done together. As a graduate this fall, I felt honored to have attended the event and I thank Dr. Bigham for encouraging us to attend.”

Kappa Omicron Nu is a national honor society of students in human sciences. The CSUSM Nu Upsilon chapter was established in 2006. Membership is open to Human Development and Kinesiology majors with a GPA of at least 3.28 and who have completed 45 semester units. For more information, contact Elizabeth Bigham at ebigham@csusm.edu.

Student Saves a Life on the Way to Class

As the spring semester came to a close and while most college students were cramming for finals and making summer plans, Lindsey Cunningham, a human development major, donated bone marrow to a 10-year-old boy she has never met.