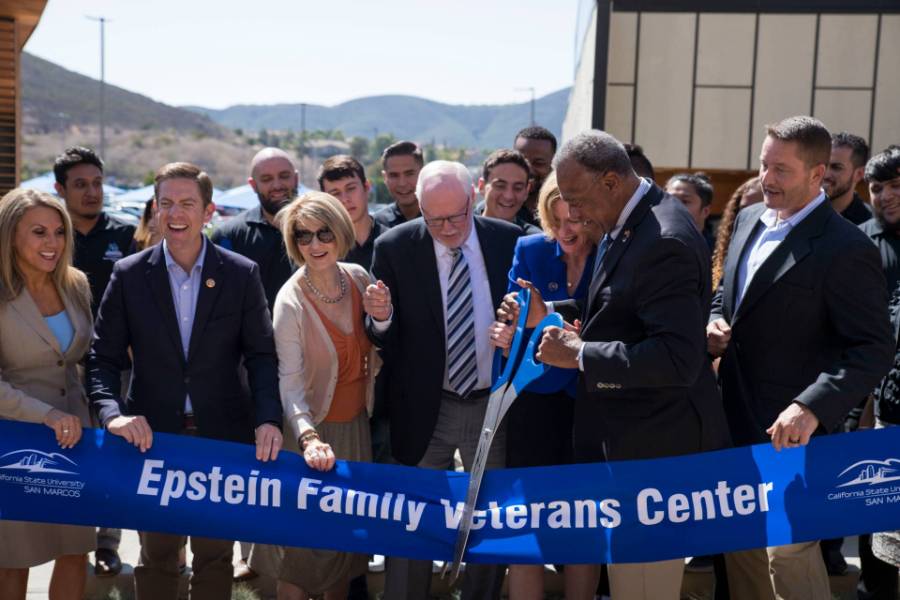 Currently, we have two buildings that serve as the Epstein Family Veterans Center; which is located adjacent to Markstein Hall.  Because of our generous donors, the Epstein Family, we were delivered a second building in April 2019 and have a renovation of our older building. This second building was an off-site build by Silver Creek. The buildings and larger deck was fully up and running in a few months.

We had our official ribbon cutting ceremony on October 10, 2019 with guests Congressman Mike Levin, San Marcos Mayor Rebecca Jones, Major General Tony Jackson, the Epstein Family, members of our foundation board and of course, our students.

Featuring office spaces, student work area, kitchen, lounge and event space, the Epstein Family Veterans Center is a place where military-connected students can receive support in achieving their academic and career goals with services tailored to their unique needs.

**All certifications are at Cougar Central**

The older building was built and designed by 60 Stevens Institute of Technology students as part of the U.S. Department of Energy's 2013 Solar Decathlon, a biannual competition in which university teams from around the globe compete to design energy efficient solar homes. The Stevens team took fourth place with their home, named Ecohabit, competing against 18 other universities from the Czech Republic, Canada, Austria and the United States.

Stevens has donated their houses to organizations such as Habitat for Humanity. This time, they wanted to donate it for use by a veteran. CSUSM was recommended to them and at our suggestion, it was decided to make it a center to serve all veterans on campus (rather than a student house for one Veteran to live in). It was generously donated to us in 2014.

This oldr building replaced a smaller facility which opened in Craven Hall in 2008 (it is the second veterans center in the CSU).

Mr. and Mrs. Joshua A. Pack