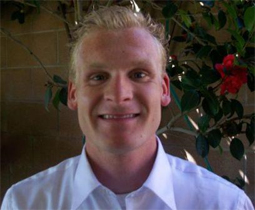 The award honors a graduating senior in the College of Business Administration, at California State University San Marcos , for outstanding leadership in school, at work, and in the community. The winner must exemplify the Center’s mission: To foster the development of effective leaders at all levels – individual, team, organization, and community.  This year’s award is being sponsored by TARGET.

Mr. Hoffman demonstrated his leadership abilities on campus by helping found the Cal State San Marcos Catholic Club and serving  as an ASI Representative for the College of Business Administration.  In his role as Team-Captain for the CSUSM Cross Country Track team, Phil was the recipient of the National Association of Interscholastics Athletics Champions of Character Award.  Accolades were also earned for Phil’s off-campus activities, which include Knight of the Month for the Knights of Columbus Fraternity, and Semper Fit as an Ocean Lifeguard.

It is with great honor that CLIMB presents the James R. Meindl Student Leadership Award to Philip Hoffman.