Daja Marks
Appearance 0:01:45
A non-fiction short film that uses culture jamming and cultural artifacts to highlight the lessons learned when tradition and language complicate our understanding of racism and discrimination, especially when it's your family/culture who's doing the teaching.

Shelby Rossman
BATH 0:03:35 Whether I am singing in the shower or sitting on the floor crying, I would never want the public to see me in my bathroom. So, I traced the contours of my bathroom in virtual reality to allow anyone with the file to literally step into my most intimate space.

Jamie Bunt
Wrong Foley 0:00:49
A student goes on Cougar Courses to check her assignments. But wait, why does everything sound wrong?

Jon Thor
The Barrows of Death: Montage 0:01:20
This is a Montage Video which illustrates a story between the concept known of six warriors known as the "Barrows of Death" part of one of my series that I did in a Semester. Prior to this, the plot of this would be turned into something else.

JonThor
Dreams of Dissonance Episode 1 (PILOT) 0:06:34
A bandit must go on a quest to kidnap the Daughter of a Senator but finds himself going out on his way to help rescue her just so he goes on his way to kidnap her in the end of the day.

Isabella Gabrielle Tabornal
Meet Bella 0:01:16
An animated self-insert character happily discusses her interests and why she does what she does.

Ben Smiljkovich
ASCENSION 0:02:57
Stepping away from traditional narrative films, ASCENSION is an abstract animation composed of gradients, film effects, and yellow orbs with an arpeggiating synth score. These components alone lack any meaning, but together they unlock deep emotions in the viewer, entrusting them with the power to decide the film's message.

Shelby Rossman
Wind Study 0:02:22
Does something as inconsequential as wind affect my mood? I collected data on wind speed in addition to my mood and then visualized this in virtual reality. Each knot indicates a knot of wind speed and the color of the knots equate to my mood at the time.

Isabella Gabrielle Tabornal
Bella’s Modding Adventures Episode One 0:10:40
A gamer goes on a journey to put herself into a video game by teaching herself how to modify its contents.

Kelly Ibarra Perez
Innominate 0:03:01
Innominate is an experimental short that seeks to question one's perspective of themselves in society and reality.

Valerie Hall
Memories 0:02:11
I was inspired by Billy Collin's poem, "Forgetfulness", to make a video on the people and things we are scared to forget, no matter how little or big, simple or grand. This video is a personal piece, but I hope it also reaches to others.

Kelly Ibarra Perez
swallow – ing 0:01:14
"swallow - ing" explores the longing for intimacy, and the feeling of anguish that this emotional struggle can caused.

Thomas Repetti
Exile 0:01:55
An experimental short film utilizing Google's Tilt Brush VR platform with glimpses of distant a mysterious lands traversed by a band of Exiles on their Journey to the Towers of Sand.

Kelly Ibarra Perez
What did I expect? 0:02:01
This video installation / experimental short film draws inspiration from a poem by Emily Rose Cole and the multiple missing women/girl cases happening lately not only in the U.S. but around the world.

Jose Valdovinos Beowulf: A Loose Retelling 0:05:46
A brave man and his companions aid a struggling kingdom in their battle against evil in a faithful retelling of the Old English epic poem of the same name.

2021 CSUSM Student Media Fest is now available to be viewed.

Awards and prizes compete in categories which may include: 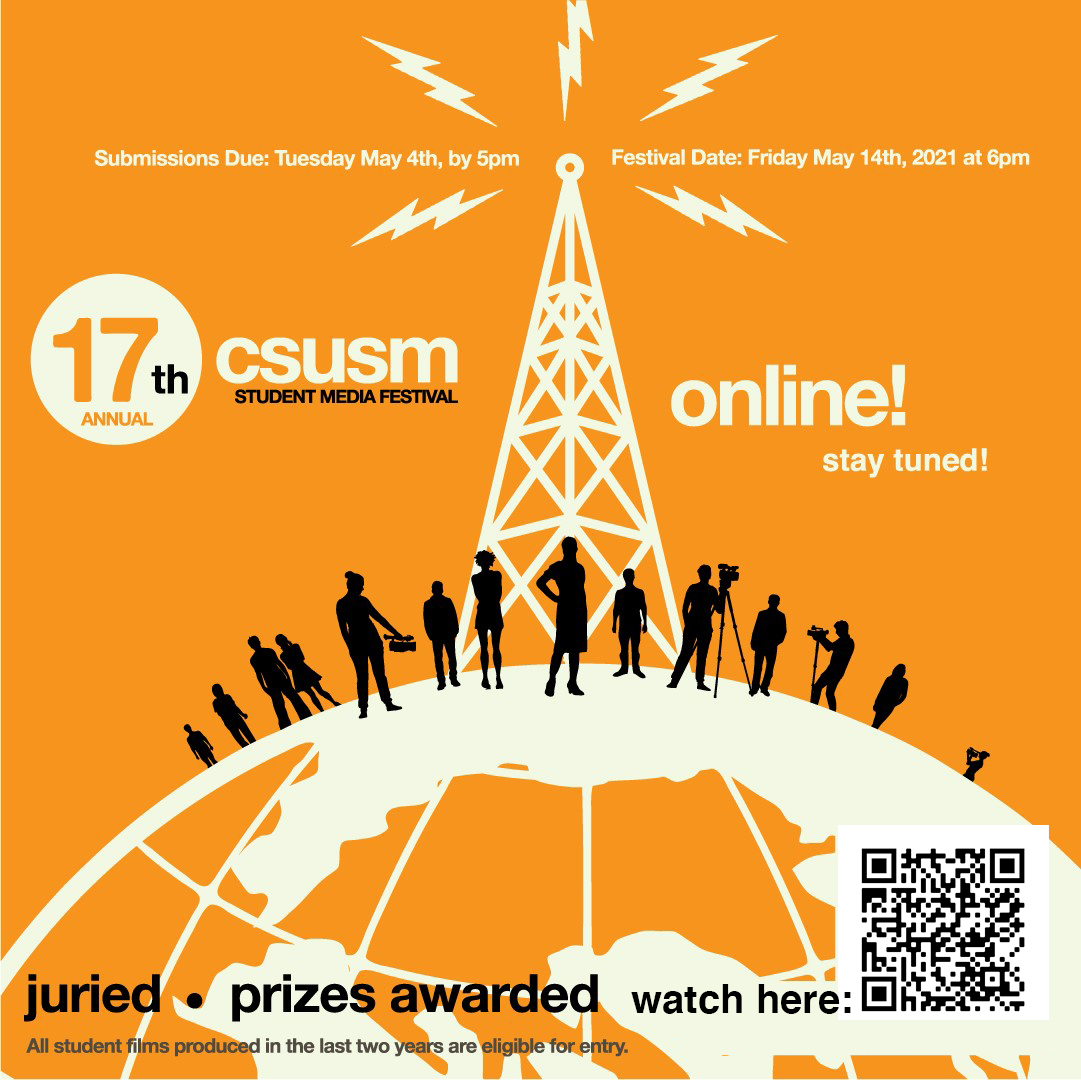 Over the years, the  Media Festival has received support from the School of Arts, the CHABBS Dean's Office, IITS, the Communication Department, Film Studies, the History Department, Literature and Writing, the Instructionally Related Activities Fund, the Media Makers Program, and Mr. Taco 2.